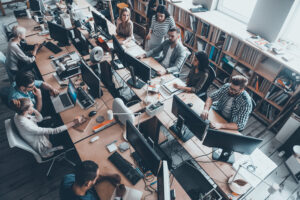 Scotland is to trial a four-day week, but without a loss of pay. A report out today includes some ideas for how it could be done, drawing on experience in Iceland and New Zealand.

Getting back to work is going to take some time, partly through resistance from office workers.

Returning to where we were more than 18 months ago seems highly unlikely.

For many, the recovery from an unprecedented shutdown and deep recession is the opportunity to implement change that might otherwise take many more years.

The four-day week, for instance. It sounds great, if you’re one of those getting a three-day weekend.

A new report, out today, has some survey evidence to back that up.

A wholly unsurprising 80% think they’d prefer a four-day week. The same proportion, and probably the same people, say it would improve their wellbeing

For employers? It’s maybe not so attractive.

BBC news has already put many of its journalists onto four-day weeks, but without reducing hours. Five eight-hour days became four 10-hour days.

But that’s not what this campaign has in mind. It aims at a bit of management alchemy: reduce hours by 20% without hitting productivity, measured in output per week, so that pay can remain the same.

How? The helpful bit is that a labour shortage in some sectors seems to be ensuring some workers get a larger share of some corporate pies.

So management pay and profits for shareholders get squeezed. The GMB trade union served notice that it’s taking the supply shortage as a cue to push for higher wages.

But instead of increasing pay, there’s the option of reducing hours. Or both. Unite the union has announced a deal with civilian workers at the Clyde nuclear bases to increase pay by 5.5% with additional annual leave.

More often, the idea seems to be ensuring that workers getting three days off per week enjoy greater wellbeing, and therefore they’re more productive. That survey suggests 65% of workers think a shorter working week would make them more productive.

The theory is to be tested in at least one trial by the Scottish government, as promised in the SNP election manifesto earlier this year.

Today’s new report comes from IPPR Scotland (the left-leaning Institute for Public Policy Research), offering advice on those trials, and pointing to some employers and countries that are making this happen.

But here’s my hunch, for nothing: an employer who is trialling a reduction in hours while retaining pay levels, is also a company that’s likely to be doing the other things that make workers happy and motivated.

These include autonomy, flexibility, trust, space for creativity, and high-quality management that makes people feel valued and that their work is worthwhile.

Cutting hours doesn’t help managers get better at managing, or that workers find ways to utilise their technology more efficiently. Not unless those reduced hours are directed to improved training, perhaps.

That is one of the ideas put out there by IPPR Scotland: those hours no longer being worked could be used to directed outcomes, of more training – perhaps related to that employment or more generally. They could be bundled up into sabbatical breaks from work.

Or they could be directed to and focused on other outcomes, such as helping workers as parents. The reduced hours, says the IPPR, could be handed to workers as annual leave entitlement, as more public holidays, or as parental leave for those who qualify.

That’s one of the motivations for Japan, which is looking at reduced hours to tackle two of its problems: chronic over-work and long-hours culture, and a particularly acute demographic challenge of its very low birth rate, and the world’s highest proportion of the very elderly.

Other countries are cited. Iceland is seen as having a generally positive experience from cutting four hours from the working week, handing an afternoon per week to staff.

It began six years ago, starting with some of the more stressful public sector roles. The outcomes justified the trial’s expansion to most of the public sector and some from the private, so that 86% of the working population is covered by it.