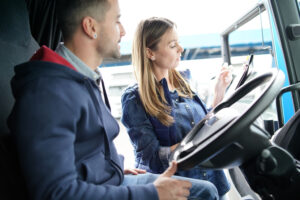 Supermarkets recruiting lorry drivers by offering higher wages will lead to shortages of hauliers needed to deliver to schools, prisons and wholesalers, MPs have been warned.

The risk to the economy from the government’s refusal to respond to retailers’ demands for temporary work visas for European drivers was set out in a meeting with the UK Trade and Business Commission, a group of MPs and business representatives.

The commission was formed in February by Best for Britain, a group that campaigned against Brexit.

Food, retail and logistics industry bodies said yesterday that the supply chain crisis would continue for months and could raise prices for consumers.

Andrew Opie, director of food and sustainability at the British Retail Consortium, said: “We are concerned that some of the drivers in other fleets, like delivering to schools, prisons and wholesalers, will be gravitating towards our chains, which is great for us and our consumers but probably not great for the economy.”

Waitrose, the supermarkets chain, is offering lorry drivers up to £53,780 a year — more than some of its head- office executives earn — as it faces a national shortage of 100,000 drivers.

The government wants industry to improve working conditions, salaries and training to attract new domestic workers. Retailers argue that factors including a backlog in driver training accreditation during the pandemic and post-Brexit immigration policies mean that consumers will face product shortages and higher food costs if a short-term visa policy is not introduced.

Opie said it was “too early” to predict whether there would be product shortages at Christmas. Richard Walker, managing director of Iceland, the food chain, and John Allan, chairman of Tesco, the supermarkets group, have said that time is running out for supply chain issues to be resolved before the festive period.

Opie said: “Our members that we’re speaking to are not anticipating major problems for Christmas at the moment, but they are also saying that, you know, it’s so challenging at the moment, it’s really difficult to keep their head above water and maximise what for many businesses is that crucial period in the run up to Christmas.

“It’s challenging at the moment and we’re expecting it to get much more challenging over the next few months.”

Richard Harrow, chief executive of the British Frozen Food Foundation, said: “I’ve never seen the sort of pressures that our members are run across such a wide range of issues, from availability of labour to cost pressures, whether that be labour costs or raw material costs.”

Roger Gale, a Conservative MP, questioned whether drivers from mainland Europe would want to work in Britain on short-term visas.

Alex Veitch, general manager of public policy at Logistics UK, said: “The market will decide and the market will land on a price point where it is attractive for them to come.”

He added that there was a gap in government policymaking to respond to the domestic shortage of HGV drivers, with the profession excluded from the government’s national skills fund at present.