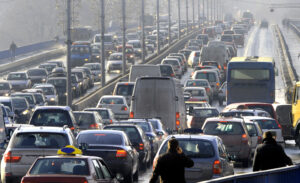 Rush-hour traffic returned to pre-pandemic levels in parts of the country yesterday as the end of home working and the start of the new school term led to a rise in congestion.

Figures showed that roads in London, Birmingham, Wolverhampton, Nottingham, Leicester and Liverpool were as busy as they were in 2019 in a sign that cities are beginning to return to normal.

Transport for London confirmed that yesterday morning was the busiest on the Tube for 18 months, since before the first lockdown. The use of buses is also on the rise, with passenger numbers jumping by 71 per cent in a week.

Commuters on other parts of the national rail network also told of crowded trains, with complaints of large numbers of travellers failing to wear masks.

The rise in rush-hour traffic follows repeated government advice for people to return to work. Official “work from home” guidance was dropped by ministers on July 19 and businesses were told that the government “expects and recommends a gradual return over the summer”.

Last month Rishi Sunak, the chancellor, told young people that the office can be “really beneficial” to their careers and warned that video calling was no substitute.

However, some big businesses have been criticised for continuing to allow staff to work from home. The Bank of England came under attack today after ditching a requirement for staff to go into the office at least one day a week.

Latest figures published by TomTom show that traffic in some cities returned to pre-pandemic levels between 8am and 9am today. Its data shows the length of additional time needed to complete a journey when compared with completely “free-flowing” traffic.

It shows that in London congestion added 61 per cent to journey times at 8am, indicating a high level of traffic in the capital. It was only marginally down on the 63 per cent level recorded at the same point in 2019 before the pandemic.

In Nottingham, traffic was actually worse than pre-pandemic levels, with congestion at 66 per cent early this morning compared with 53 per cent in 2019. Congestion was also worse in Liverpool at 50 per cent compared with 47 per cent two years ago.

The rise was partly explained by the return of schools in England and Wales, with the new term starting in most of the country late last week.

Congestion was also close to pre-pandemic levels in Glasgow — 43 per cent today against 48 per cent in 2019 — although schools returned in August north of the border.

Separate data from Transport for London also shows a sharp rise in passengers using the London Underground and the capital’s buses. A total of 831,000 “taps” — entrances and exits — were registered on the Tube between 7am and 10am.

Although this was only 45 per cent of pre-pandemic levels, it was still the busiest morning on the network since March 2020, TfL said. The organisation said it expected total passenger numbers to be above 50 per cent by the end of service today.

Some 860,000 bus journeys were recorded over three hours this morning in the capital. At the very busiest time, between 8am and 9am, demand was up by 71 per cent compared with a week earlier. Overall, passenger numbers were 64 per cent of pre-Covid levels.

TfL said “clearly people are still returning to the network”, with many of those using the Tube likely to be commuters using the Underground to reach the workplace while bus passenger numbers were largely driven by schools.

Elsewhere on the rail network, passengers took to Twitter to complain about crowding on some trains operated by companies including ScotRail, Cross Country, Northern, Southern and Chiltern.

Despite the rise, in many other cities congestion continues to lag far behind pre-pandemic levels. TomTom’s data suggested that traffic in Manchester, Leeds, Bristol, Brighton, Portsmouth, Hull, Sheffield, Newcastle, Cardiff, Belfast and Edinburgh was still low compared with congestion in 2019, indicating that the rise in city centre working is not universally spread.