Tonic for Fever-Tree as sales pick up 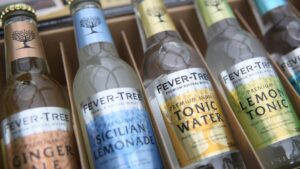 Investors in Fever-Tree Drinks breathed a sigh of relief after the upmarket tonic maker reported strong sales and issued reassurance that the fall in profit margins behind July’s profit warning had not got any worse.

Tim Warrillow, the Fever-Tree chief executive, said that although he still expected rising logistics costs to weigh on the company’s margins “into next year”, it was maintaining the updated guidance on margins and revenues provided two months ago.

Warrillow, 46, warned at that time that a “perfect storm” of rising freight costs in the US and UK had “come together to have a notable effect” on the group’s bottom line, cutting underlying margins to about 20 per cent and sending the share price tumbling 7 per cent.

Edward Mundy, an analyst at Jefferies, said today that he expected there to be “some gentle relief” at the maintaining of the 2021 margin guidance of 20 per cent, although uncertainty over the outlook for next year might prompt some trimming of 2022 expectations.

Fever-Tree was established in 2004 by Warrillow and Charles Rolls to make high-quality tonic for the premium gin market and it now sells a range of mixers in more than 75 countries, with America, Canada, Australia and Germany among its biggest markets.

In the first half of the year, Fever-Tree reported a 23 per cent increase in underlying earnings to £29.2 million on an adjusted basis, with total revenues up 36 per cent to £141.8 million – up 39 per cent at constant currency – despite the continuing impact of Covid 19 restrictions.

Asked what had changed since July’s unscheduled trading update, the Fever-Tree boss said: “Nothing to any degree, although on topline growth I’m getting ever more optimistic. We’re seeing growth across all our regions and channels, with really strong growth in the US.”

In the UK, its biggest market, revenues grew by 4 per cent to £50.3 million as pandemic restrictions in the on-trade – pubs and bars – eased. It said its off-trade sales – supermarkets and off-licences – had “continued to perform above expectations as the popularity of enjoying long mixed drinks at home has been sustained, with Fever-Tree growing share”.

One of its best-selling variants in the UK has been its rhubarb and raspberry tonic, launched at the end of last year, which has appealed to a younger audience. Among its strongest performers in the US have been two of its sodas, sparkling pink grapefruit, launched last year, and sparkling lime and yuzu, launched in February.

While July’s profit warning may have left a nasty taste in shareholders’ mouths, Warrillow himself has been left without his sense of taste after a recent bout of coronavirus. “It’s really annoying. I can’t even enjoy a drink, although it’s starting to come back.”

Read more:
Tonic for Fever-Tree as sales pick up