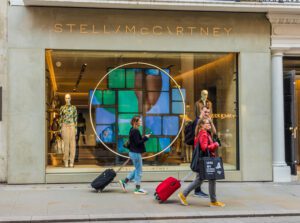 Stanley Gibbons, the rare stamps and coins dealer, has put its American division into administration after a dispute with Stella McCartney.

The fashion house, which trumpets its ethical ethos, closed its boutique in Manhattan in April last year and stopped paying its landlord, Stanley Gibbons. The stamp seller had sub-let the property on Madison Avenue to the fashion label and was out of pocket to the tune of $1.3 million (£942,000).

After failing to cut a deal with the shop’s owner, Stanley Gibbons requested Chapter 11 protection for its US subsidiary, Mallett Inc. This pauses a company’s obligations to creditors, allowing it time to sell assets and restructure debts.

Stanley Gibbons said it had reached a “settlement agreement” with the fashion brand last month, but did not reveal the terms. It failed to secure relief on its rent arrears and could not negotiate an early termination of the lease, which runs until 2027. Stella McCartney has been renting the shop from Stanley Gibbons since 2016.

The store is one block from Central Park on Manhattan’s swish upper east side and is surrounded by high-end boutiques such as Christian Louboutin, Carolina Herrera and Ralph Lauren. The building is owned by the Goldman family, which controls property with an estimated value of $13 billion.

McCartney, 50, the daughter of Sir Paul and his late wife Linda, is one of the world’s best-known designers.

Luxury goods endured a turbulent pandemic as the collapse in travel hurt visitor numbers to stores.

Edward Stanley Gibbons was born in 1840, the year the Penny Black, the world’s first postage stamp, was issued. In 1856 he opened a stamp counter at his father’s shop in Plymouth. The dealer is based in London, where its shop on the Strand offers more than a million stamps.

Graham Shircore, 39, Stanley Gibbons’s chief executive, said it retained the support of its main creditor and hoped to complete the US bankruptcy process “as swiftly as possible”. The company had acted to “protect the group’s remaining assets and minimise the future liabilities”, he added.