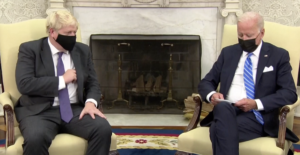 President Biden poured cold water on the prospect of a UK-US trade deal at his first White House meeting with Boris Johnson last night, as ministers discussed plans to join a North American free-trade pact instead.

Sitting beside Johnson in the Oval Office, the president did not deny that Britain is at the back of the queue for a bilateral trade deal and said he felt “very strongly” about the Irish border. Although a transatlantic free-trade agreement has often been held up as a big prize of leaving the European Union, the government is increasingly pessimistic about resurrecting talks. Biden did nothing to dispel that notion.

Asked about the issue at the start of the meeting, Biden said that they would discuss trade “a little bit”, adding: “We’re going to have to work that through.”

The president said that he felt “very strongly” about the post-Brexit Northern Irish protocol. “We spent an enormous amount of time and effort, the United States, it was a major bipartisan effort,” Biden said. “And I would not at all like to see, nor I might add would many of my Republican colleagues like to see, a change in the Irish accords, the end result having a closed border in Ireland.”

The Northern Ireland protocol, in effect, established a trade border between Great Britain and Northern Ireland after Brexit. The UK wants to change the deal but Biden fears that this could inflame tensions on the island of Ireland.

Biden and Johnson were on happier territory on other issues. Biden said he would be at the Cop26 climate summit “with bells on” and Johnson told the president that he was a “living deity” while on the train that the British delegation took to Washington from New York.

Johnson gave Biden a copy of the astronaut Tim Peake’s book Hello, is this planet Earth?, a reference to their shared commitment to combat climate change. Biden gave Johnson a framed photo of the two of them together at the G7 summit in Cornwall in June, as well as a White House-branded watch.

The disappearing hope of a UK-US trade deal has led to officials finding alternative plans to deepen trade ties between Britain and the US. In a move that would mark a re-orientation of trade away from Europe, The Times understands that ministers are considering applying to join America’s trade pact with Mexico and Canada.

“There are a variety of different ways to do this,” one senior government figure said. “The question is whether the US administration is ready. The ball is in the US’s court. It takes two to tango.”

Among the options being considered in Whitehall is for Britain to apply to join the US-Mexico-Canada agreement (USMCA), a low-tariff pact negotiated by Donald Trump, which came into effect last year and covers a multitrillion-dollar market. The prospect of Britain joining that deal, which has not been disclosed before, would mark a realignment of British trade away from Europe and across the Atlantic. In meetings this week on the sidelines of the United Nations general assembly in New York, Britain is understood to have urged Biden’s team to re-energise trade talks between the two countries.

British officials told their American counterparts that their trade links were stronger at present with Canada and Mexico than with the US. Yet they concede that there is, in effect, no chance of the talks, which began while Trump was president, being renewed in the near term, and certainly not before the midterm elections in November next year.

In addition to the USMCA, the government is understood to be examining whether it could deepen trade with the US via the Comprehensive and Progressive Agreement for Trans- Pacific Partnership (CPTPP), a trade deal with 11 signatories that also includes Canada and Mexico as well as Japan, Australia and Singapore.

Britain applied to join CPTPP in February, and the US has recently indicated it is considering joining. Trump pulled out of the original deal in 2017. Another option is to strike a series of smaller deals with the US, such as on aligning data and digital standards.

US-Mexico-Canada agreement (USMCA)
Signed in November 2018, it was proposed by Donald Trump as Nafta 2.0. The USMCA was intended to modernise old agreements with regard to intellectual property and digital trade.