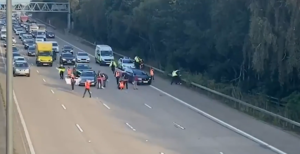 M25 protesters will face prison sentences if they attempt further roadblocks after a court granted an interim injunction to ban demonstrations.

Activists from the Insulate Britain group who breach the injunction, which will take effect today, will be in contempt of court, which can attract a custodial sentence of up to two years and unlimited fines.

Crucially, it will allow police to detain individuals on remand to prevent them from returning to join future protests.

So far about 90 activists have been free to return to motorway roadblocks despite being arrested because police can hold them for a maximum of 24 hours under existing powers. Yesterday activists ran into oncoming traffic on the M25 during a fifth day of protests.

Priti Patel, the home secretary, and Grant Shapps, the transport secretary, ordered National Highways, the government agency formerly known as Highways England, which is responsible for motorways and A-roads in England, to apply for an interim ruling pending the outcome of their application for a full injunction. This is expected to be heard later this week.

The disruptive actions by Insulate Britain this week are completely unacceptable.

Patel tweeted this morning: “I can confirm this government and @NationalHways are taking action to bring the ongoing #M25 protests to end with an important injunction so people can get moving again. We will not tolerate lives being put at risk. Those who continue to do so risk imprisonment.”

Yesterday a section of the M25 near Woking, Surrey, was targeted, with protesters blocking traffic in both directions. Video from Junction 10 showed protesters on the hard shoulder trying to get on the carriageway, where the speed limit was 70mph. Surrey police made 38 arrests.

The AA said that Insulate Britain, which wants the government to fully fund the insulation of all social housing in Britain and believes Extinction Rebellion is too moderate, risked causing multiple fatalities.

A civil injunction can be granted when the court is satisfied that an individual has engaged in, or threatens to engage in, conduct capable of causing nuisance and annoyance. The government’s legal case focuses on the impact of the protests on the safety of road users. The interim injunction prevents named individuals from taking part in protests until the outcome of the full injunction hearing.

George Eustice, the environment secretary, told Sky News this morning that the idea of the injunction was to “give police stronger powers to be able to intervene pre-emptively to stop these protests happening so that you are not getting a situation where you have to wait for them to sit on the road, cause chaos and then have to remove them after the event”.

Lisa Townsend, Surrey’s elected police and crime commissioner, had called for tougher sentencing of the protesters said: “I think a short prison sentence may well form the deterrent that is needed, if people have to think very, very carefully about their future and what a criminal record might mean for them,”