Halewood factory in the frame for Ford’s electric drive 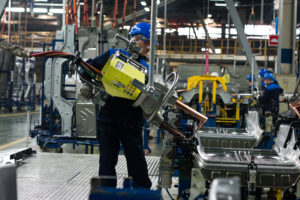 Hopes are rising that Ford will convert its automotive gearbox transmission operation at Halewood on Merseyside into manufacturing the equivalent e-drive systems for electric cars.

If the American motor group decides to go ahead, the move would be likely to sustain hundreds of jobs. It also would be a bonus for Britain’s electric car industry, which is running behind its European competitors.

Ford is said to be within weeks of making a decision on a substantial investment to switch its Halewood operations to an electric future.

Industry sources have confirmed that the Merseyside plant is the frontrunner in its thinking.

Ford, which stopped building cars in Britain two decades ago, declined to comment on any decisions, but said that it was going “all-in” on electrification. “All our passenger vehicles and two thirds of our commercial vehicle sales are expected to be all-electric or plug-in hybrid by 2030,” it said.

Sky News reported that Ford had been in talks with the business department, indicating that it is hoping for taxpayers’ support from the Treasury’s Automotive Transformation Fund.

A previous initiative from Ford will involve its Transit van engineering plant at Dagenham, east London, moving towards making components for electric vehicles.

The company plans to build electric cars for the European market in Cologne, Germany, and there is little likelihood that any future battery gigafactory would be based in Britain. However, the e-drive system, which takes power from the motor to the axles, is a key component in electric cars and securing its manufacture would be a big win for a UK industry that is watching much of the European electric vehicle revolution taking place in Germany.

The first models to roll out of Halewood, which is on the outskirts of Liverpool, were Ford Anglias and Corsairs nearly 60 years ago. Escorts and Capris were made there later.

When Ford switched car production to the Continent at the turn of the century, Halewood started to make vehicles badged as Jaguars and Land Rovers — at the time, Ford subsidiaries. On selling Jaguar Land Rover to Tata Motors in 2008, Ford retained the part of the Halewood plant making gearboxes in a collaboration with Getrag, a German parts maker. Getrag left the joint venture this year.

Stellantis, the automotive group, is to start making electric Vauxhall, Peugeot, Citroën and Fiat vans at its Ellesmere Port factory a few miles away from Halewood, albeit at low volumes. The Bentley plant at Crewe in Cheshire has committed to converting all its output to electric, while Jaguar is going down the same road in Solihull.

The UK’s first gigafactory is under construction by Britishvolt at Blyth in northeast England, while Nissan in Sunderland has committed to a gigafactory there. Arrival is to soon begin construction in Oxfordshire of electric vans for UPS and electric buses for FirstGroup.