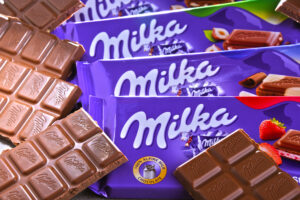 A multinational confectionery company has threatened legal action against a London vegan snack maker over the colour of one of its fruit bars.

Mondelez alleges that the Primal Pantry’s cocoa bar “exploits” the trademark of its Milka chocolate range.

Lawyers for Mondelez are demanding the use of lilac packaging for the bar must stop, warning of a £5,200 penalty each time the trademark is infringed.

The snack bars were launched in 2016 in a range of colours so that “they have good differentiation on a shelf together”, said Adam Draper, managing director of Nurture Brands.

“We don’t think it is the same colour or even in the same spectrum,” Mr Draper added.

Despite the legal letter, Mondelez has not provided evidence the packaging colour is similar enough to infringe on the Milka trademark, Mr Draper said.

Founded in London, Nurture Brands supplies plant-based snacks across Europe. It employs 26 people in its Barbican headquarters and runs a factory in north-east England.

“They’ve not sought any facts and gone in all guns blazing,” he said.

“If they can prove to me the colour is in the range, I will work with them but I’m not going to throw away all our products in the EU.”

To recall the products and remove all packaging currently in circulation could cost between £30,000 and £50,000 “without factoring in all the fines”, Mr Draper estimates.

It is understood that Mondelez has given Nurture Brands six months to change the packaging.

US firm Mondelez owns many famous names, including Toblerone and Oreo, with the British brands Cadbury and Kenco also part of its empire.

In 2019, its subsidiary Cadbury lost an appeal to protect the particular colour of purple it uses to wrap its chocolate.

A spokeswoman for Mondelez said: “We own a colour trademark in Europe for the distinctive lilac Milka colour for food products.

“As a matter of practice, to protect the values of our brands which we have worked hard to build over hundreds of years, we express our concerns to third parties when we feel they are using a protected brand element.

“We have opened up conversations with Primal Pantry to try and resolve the matter amicably.”