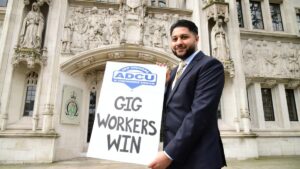 Uber threw down the gauntlet to rival ride-hailing platforms as it revealed details of pension benefits that it will offer for the first time to all 70,000 of its British drivers.

The company urged competitors including Bolt, Ola and Addison Lee to co-operate on creating an industry-wide scheme, warning that drivers would miss out otherwise.

Uber said that it had hired Now: Pensions, the workplace pensions platform, and Adecco, a benefits administrator, to operate its scheme, which is the first for a ride-hailing app’s drivers.

All its drivers will be enrolled automatically in the scheme, under which they will contribute 5 per cent of their earnings above £120 a week, with Uber topping this up with a 3 per cent contribution. They have the right to opt out.

The scheme will be rolled out city by city, starting immediately in Sheffield and ending with London in November. Contributions will be backdated to May 2017 or the driver’s first Uber trip, whichever is most recent.

Uber has been forced to pay pensions and offer other benefits such as holiday entitlement to drivers after the Supreme Court ruled in February that they should be classified as workers, not contractors. The judgment is thought likely to set a precedent for similar platforms, but most are resisting pressure to introduce driver pensions.

Some Uber drivers could still lose out because they drive for more than one platform and they have to earn more than the threshold of £120 a week from any single app to qualify for a pension contribution from that company. Uber said that a cross-industry pension scheme would allow them to benefit no matter who they drove with.

Mick Rix, from the GMB union, which Uber recognised in May, said that it was a “massive step in the right direction” and urged others to follow.