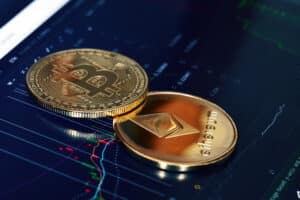 There is an “unseen game of control” playing out in the cryptocurrency market. Analysts believe that the competition is between Bitcoin and Ethereum.

Indeed, the cryptocurrency market is an interesting financial market to watch. The resilience, the speed of depreciating values, and the fast-paced accumulations of crypto-assets are worth looking into.

Analysts have opined that Ethereum, which is currently the second-largest crypto by market cap, could give Bitcoin a run for the money. This is coming on the heels of the dramatic increase in the value of Ethereum following the $300 billion market capitalization in the second quarter of the year.

Bitcoin vs. Ethereum: Which is the Bull?

The competition had been left to Bitcoin (BTC) sometime around 2009 when it was the primary cryptocurrency.

Now, the trend has changed with coins like Ethereum coming into the fold and doing some numbers that leave investors holding their breaths.

Now, which of these two is the bull in the cryptocurrency market – is it Bitcoin or Ethereum? Check out here:

Why Ethereum is Likely to Lead the Cryptocurrency Market

Ethereum had an astronomical spike in its value. From its earlier value around $300, the coin “continued to fly” until it got to the $3,000 market. It again broke that resistance and continued on the upward trend until the market retraced amidst some important corrections.

That move sparked the interest of many investors who have started positing that Ethereum could likely take over the crypto market from Bitcoin.

Here are a couple of reasons why this might happen:

1.    Lots of Developments are Coming into the Ethereum Blockchain

Ethereum is not like Bitcoin that promises to be a “store of value.” From what analysts say, the coin and its native blockchain have created a framework for more developments to be made in the crypto ecosystem.

With these developments in place, it seems that Ethereum is positioning to take over the stead from Bitcoin.

The Ethereum blockchain has provided the infrastructure for lots of other cryptocurrencies to emerge.

Besides, some of these coins have started working on a standalone basis, whereby the volatility of Bitcoin wouldn’t overly have negative impacts on their growth.

Bitcoin does not only have the “first-mover” advantage. It also has some of the best features that will keep it at a valuable position above Ethereum and the Alternative Coins (Altcoins).

Here are some cogent reasons that support the dominance of Bitcoin in the cryptocurrency market:

Institutional buyers have at different times lent support to the leading cryptocurrency, Bitcoin. This is partly because of the infrastructure that comes with the coin and mainly because of the long-term focus.

Recently, several tech companies added Bitcoin to their balance sheets, further lending weight to the relevance of the coin.

Although some cryptocurrencies have emerged, the primary role of being a store of value remains one of the unique features of Bitcoin. This is also why it will continue to dominate the crypto market for many years to come.

With inflation on the rise in the United States and many countries looking to cut down on debts, it is obvious that another financial crisis is underway.

Hedging inflation and maintaining to a considerable extent, the value of the native currencies has driven many countries into Bitcoin investment. El Salvador took the bold move, and will soon be joined by other countries.

Bitcoin is to the cryptocurrency market what the United States Dollars is to the global financial market.

From the economics angle, Bitcoin has a higher chance of dominating the crypto market for many decades to come. It has done so for a decade now and it looks good to continue the bullish moves.

The finite supply of Bitcoin to just a million coins is working in its favor because more investors will be looking to get their hands on the coin.

The last supply of Bitcoin will be in 2140. Thereafter, no other will be minted. Between now and then, the demand will be so higher that the value of Bitcoin could go as higher as $500,000 or more.

Conclusion: Bitcoin Still has the Upper Hand, but Ethereum is Pulling Some Weight

Bitcoin (BTC) has done well for itself and retained its leading position for over a decade. The future of Bitcoin looks bullish, and of course, it will be filled with pullbacks and some spikes.

Investors are advised to make due diligence and invest what they can afford to lose because the market is quite volatile.

On a larger scale, the Bitcoin cryptocurrency is still dominating and it is not giving up the position anytime soon to Ethereum.