Next calls for immigration rules to be relaxed 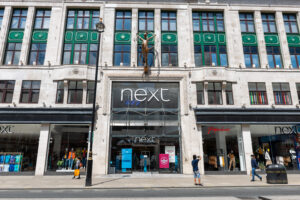 Next has said its operations won’t be as efficient in the run up to Christmas unless the government relaxes immigration rules for workers.

The UK retailer said some areas of its business were “beginning to come under pressure”, including warehouse and logistics staffing.

It added that the lorry driver crisis was “foreseen, and widely predicted”.

The company urged the government to “take a more decisive approach to the looming skills crisis”.

Next’s warning over potential staffing issues during the festive period was made as it published its half-year results, which showed profit before tax was up by 5.9% compared to 2019 levels.

In its results Lord Wolfson, chief executive, said the retail bounce-back from the coronavirus pandemic was “far stronger than we anticipated”.

“Sales in retail stores have done better than planned, while online sales have fallen back less than we expected. It appears that the wider economy has not suffered the long term damage many feared, for the moment at least. And, in particular, employment has held up well,” he added.

Lord Wolfson said Next had not currently having difficulties in recruiting staff for its stores, but warned “some areas of the business are beginning to come under pressure, most notably staffing for peak seasonal demand in warehousing and logistics”.

“We anticipate that, without some relaxation of immigration rules, we are likely to experience some degradation in our service in the run up to Christmas,” he said.

Many UK sectors, from fuel firms to supermarkets, have supply chain problems at the moment due to a chronic shortage of lorry drivers.

In a statement, Next added: “The HGV crisis was foreseen, and widely predicted for many months. For the sake of the wider UK economy, we hope that the government will take a more decisive approach to the looming skill crisis in warehouses, restaurants, hotels, care homes, and many seasonal industries.

“A demand led approach to ensuring the country has the skills it needs is now vital.”

Read more:
Next calls for immigration rules to be relaxed