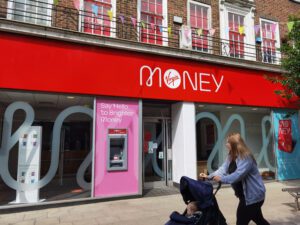 Virgin Money has prompted a row with unions over plans to close 31 branches, including 12 in Scotland.

The closures will reduce its network to 162, down from 245 when Virgin Money merged with Clydesdale Bank in 2018.

The union Unite said that the latest reduction was shameful and would hit Scotland “disproportionally”, leaving rural and remote areas without adequate banking services.

Virgin Money is the latest bank to increase branch closures after the pandemic, which encouraged more customers to switch to digital services and reduce the use of cash. Santander announced plans to close 111 branches this year and HSBC said it would shut 82 branches. Lloyds has resumed plans to cut 56 branches last year and TSB, owned by Sabadell, is axing 164 branches.

Virgin Money’s branches, which it calls stores, will close early next year after a drop in day-to-day transactions being carried out in person, it said. Fergus Murphy, group customer experience director, said: “As our customers change the way they want to bank with us and conduct fewer transactions in-store, we must continue to evolve the role of our stores into places where we showcase our products and bring our digital services to life.”

There will be an extra £25 million charge in the fourth quarter as a result of the closures, taking the total cost to £45 million in the period, as Virgin Money had already planned to spend extra modifying its office space. The bank said its restructuring charges for 2021 as a whole would now be £145 million in total.

Virgin Money, set up by Sir Richard Branson as part of his Virgin empire, bought part of nationalised bank Northern Rock in 2011 and was floated on the stock market in 2014. It was then bought by CYBG, owner of Yorkshire and Clydesdale banks, in a 2018 deal. Part of the deal was the use of the Virgin name, which involves paying annual fees to the Branson business.

The bank said 28 of the branches being closed were less than a third of a mile away from the nearest Post Office, where customers can deposit and withdraw cash and pay in cheques. A branch used only by employees in Gosforth, which had been Northern Rock’s headquarters, will also not reopen after its closure at the start of the pandemic.