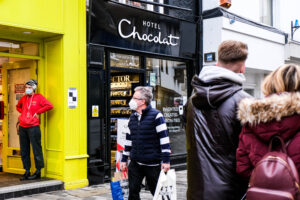 Hotel Chocolat has added to the concerns about shortages and price rises in the run-up to Christmas after revealing it is increasing prices across its chocolate range.

He said prices would rise across a number of products in its range, from alcohol-infused treats to chocolate collections — many of which had stayed the same price for five years.

“We’re moving to increase prices now to protect quality and make this important investment into sustainable cocoa farming,” Thirlwell said. “There’s quite a bit of inflation around in the supply chain — some of it is temporary and will unwind, while some isn’t.”

Businesses across the UK are battling cost pressures, with inflation affecting everything from raw ingredients to gas and electricity.

Thirlwell said the group’s team of lorry drivers had been given “chunky” double-digit percentage pay rises to secure staff amid the HGV driver shortage. This, together with the group’s UK-based distribution and chocolate factory in Huntingdon, means it has been able to avoid the supply and stock issues that have blighted many other retailers. “It means we’ll have really good availability of Hotel Chocolat products for Christmas and there won’t be any empty shelves,” Thirlwell said.

However, it has added to Hotel Chocolat’s costs, coming on top of its pledge to invest another £2 million this year in its cocoa farming communities, paying them more in return for a commitment for sustainable farming.

News of the price rises came as Hotel Chocolat reported a better than expected annual profit, thanks to a shift towards online sales offsetting lockdown store closures. The group said underlying pre-tax profits were £10.1 million in the year to June 27, up from £2.4 million previously.

Revenues rose 21 per cent to £164.6 million, with more than 70 per cent of sales made online, as well as through partners and subscriptions, helping it overcome six months of store closures due to Covid. The digital push has seen online sales overtake store sales for the first time in the group’s history.

Analysts at Liberum praised a “transformational” year for the retailer, adding: “From a UK-centric brand five years ago to one with global ambitions, the last year has seen the group raise fresh capital to set these foundations in place.”