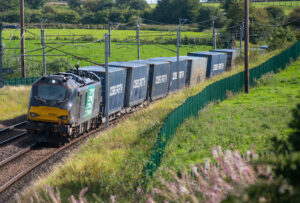 Tesco is to increase its use of trains to distribute products by almost 40% as its boss credited investment in rail freight for helping to keep its shelves stocked during the lorry driver crisis.

Ken Murphy, the chief executive, said the retailer had continued to cut prices despite commodity price increases and rising delivery costs but admitted it had reduced the level of discount promotions as well as the choice of products, such as pasta, in order to ensure it was fully stocked.

Murphy said the supermarket aimed to deliver 90,000 40ft containers of goods a year to its warehouses via trains by the end of 2021, up from about 65,000 at present. The tactic comes amid a battle for lorry drivers that led Tesco to offer new sign-ups a £1,000 incentive this summer.

Tesco’s rail service already includes five trains a week that bring fresh produce to the UK from Spain. From next month, Tesco will add two new UK food transport train services, including one that will link Spain with Scotland.

Murphy said Tesco was one of only three retailers that used a significant amount of rail freight. “This is a fantastic story from a sustainability point of view but it has really come into its own helping our supply chain resilience,” he said.

The UK’s biggest supermarket doubled profits in the first half of the year as it reduced costs related to the coronavirus pandemic and said its strong supply chain had meant it experienced fewer shortages than rivals despite the industry’s widespread delivery problems.

Tesco said its shoppers had sought out clothing and other household goods while it got a boost from more families holidaying in the UK because of travel restrictions and the Euro 2020 football tournament, which was postponed to the summer of 2021.

“As industry supply chains came under increasing pressure, we were able to leverage our strong supplier relationships and distribution capability to maintain good levels of availability for customers, contributing to our market outperformance,” it said.

Tesco’s online business continued to grow – by 2.3% – and shoppers stuck to big shops and large supermarkets as Covid concerns remained. Sales in its convenience stores fell as those in commuter areas lost out from the switch to working from home. The company is testing out a fast-track grocery service – Whoosh – from its convenience stores and this is now in 60 shops.

Murphy said Tesco was launching a £500m share buyback for investors as it expected to make up to £2.6bn of profits for the full year, about £700m more than previously anticipated.

The profits upgrade came despite a £193m payout to shareholders related to a legal case linked to an accounting scandal at Tesco from 2014. A recovery at Tesco’s bank, which returned to profit, helped offset continued additional costs relating to Covid-19 and the repayment of business rates relief to the government.

Murphy said sales growth continued to be strong and he did not expect any significant stock shortages in the run-up to Christmas because Tesco would use its strong relationships with suppliers to secure enough goods.

The supermarket has secured 10% more turkeys for Christmas than last year, for example, with sales of frozen birds already running ahead as shoppers aim to secure a festive centrepiece early.

Future profits will be partly boosted by a new target of £1bn in cost savings over the next three years. Tesco’s finance director said this would not be about significant job cuts but about many efficiencies, including more automation in warehouses and considering the closures of some head office space now that more staff were working from home.

The group will take on 30,000 temporary staff in the run-up to Christmas and Murphy said half of those were already in place and he did not expect major problems with recruiting the rest.