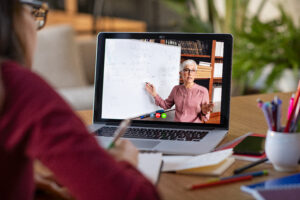 It’s raised $300 million in its latest investment round at a time when the firm is seeking to expand internationally through M&A opportunities.

Now valued at $18 billion, the investments – led by New York-based Oxshott Capital Partners and  Edelweiss among others – testify not only to the continuing faith into Byju, but further underlines how edtech companies are able to capitalize on the pandemic.

The recent international expansion of Kahoot, a Norwegian gamification outfit, are testament to the global appeal and ambition of edtech. And although the lockdown restrictions have turned online schooling into a staple rather than a luxury, it’s clear that there will be no return to the old days of education when (or if) the virus is vanquished. Instead, the future of classrooms across the planet is currently being reimagined by resourceful companies such as Byju and Kahoot – and many other exciting start-ups in their image.

Edtech is hardly a new concept, though its role in the classroom has evolved dramatically in recent years. Whereas it was once nothing more than a visual aid to education, it has now revolutionized the way in which lessons can be delivered and consumed. Indeed, the ability to dispense education at distance is now invaluable – a realization that has led to Byju’s massive influx of investments and increase in valuation.

That point has become particularly pertinent on a global scale during the last 18 months. With schools, universities and other learning establishments closed for many months, remote learning became an essential rather than an extravagance. This sparked massive investment in edtech, with global funding in 2020 over doubling ($16.1 billion from $7 billion) the previous year’s total. The United States are, predictably, one of the biggest players in the sector: in the first half of 2021, $3.2 billion was raised by edtech start-ups, compared to $2.2 billion in the entirety of 2020. That investment was reflected in the fact that 90% of K-12 districts in the States are now providing each student with their own device, compared to around two-thirds prior to the pandemic.

While the likes of Byju’s are reaching the big leagues as a result of the pandemic, many other firms have been making their mark on the edtech sector for years, having been ahead of the curve even before Covid enveloped the globe. This particularly the case for the more mature European and American markets, where worldwide adopted companies are established in the sector. Even so, the pandemic has triggered a shift in the US market, which has traditionally been dominated by domestic companies, but is now being increasingly infiltrated by European competitors.

Although Byju’s is also expanding into the US market through various acquisitions this year, another exemplary case in point is Kahoot, an Oslo-based firm specializing in incorporating entertainment into education. In May, Kahoot acquired the California-based brand Clever, which aims to overcome the fragmented nature of software solutions in the US school system. It has enjoyed considerable success so far, with its single sign-on portal used by 65% of all American K-12 schools. That equates to 89,000 institutions across 13,000 districts and some 20 million students taking 5.6 billion lessons each month.

By absorbing Clever under the Kahoot umbrella, the latter is expected to help the former expand into the global market, all the while taking advantage of Clever’s firm foothold in the US industry. It comes at a time when business is particularly booming for Kahoot, as well. It recently secured significant investment from SoftBank’s SB Management, who bought a 9.7% share in the Norwegian company in October 2020 and added a further 3.75% to their stake just months later.

In terms of Kahoot’s market performance, all its metrics are pointing in the right direction, too. Its 28 million active accounts and 279 million games over the last 12 months are both up on the previous year by a healthy 68% and 28%, respectively, while its actual revenue ballooned to $16.2 million for Q1 of 2021, up 284% from the $4.2 million recorded the year prior.

The future of education

As well as being a mutually beneficial business arrangement for both parties, the acquisition can also be viewed as a symbol of the dynamic and global nature of the edtech industry. The failings of the system have been there all along, it’s just that the spotlight that the pandemic has placed upon them has made their presence now impossible to ignore.

With that in mind, Covid-19 has certainly acted as a catalyst for edtech companies to create more targeted and more efficient solutions to the issues – and for investment funds like SB Management or Oxshott Capital Partners to pour in the capital they require to bring their visions into reality. The most astute operators with the most capable offerings are already rising to the top in the shape of firms like Byju’s, and bolstering the growth trajectories of established ones like Kahoot, but they certainly won’t be the last. As edtech continues to innovate and advance, more and more exciting enterprises will continue to surface, spelling a sea change in the way in which teachers teach and students learn forever.