Containers pile up at Felixstowe 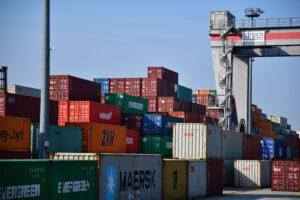 Britain’s biggest shipping container port is so congested that its management is considering turning vessels away.

The Port of Felixstowe is struggling to cope with the volume of cargo and has become severely congested, partly due to a shortage of HGV drivers, according to ITV News reports.

The average container is spending more than nine days at the port before it is collected — double the average “dwell time” in 2020. In the last week of September, the average wait was higher than at any point last year.

Felixstowe is handling similar import volumes to 2019, but is importing more containers than it is managing to transport out by rail and road. Businesses claim that the shortage of drivers has led to a fall in the number of container collections and that labour shortages at the port are hampering unloading and reloading of ships.

Hauliers estimate that the number of container collections last month was down by 15 per cent to 20 per cent.