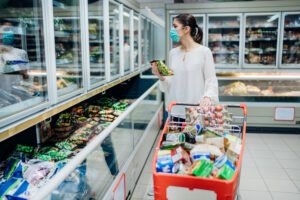 Research by the British Retail Consortium and KPMG found that supply chain shortages and rising food and energy prices had dented consumer confidence.

Data from Barclaycard also showed that September’s spending was 13.3 per cent higher than it was in the same period in 2019, but it was being driven by spending on essential items such as fuel, up by 11.1 per cent, and supermarket shopping, up 14.7 per cent.

Helen Dickinson, chief executive of the BRC, said that September had suffered the slowest growth in retail sales since January. “There are signs that consumer confidence is being hit as the fuel shortages, combined with wetter weather, had an impact in the second half of the month.” She said that the fourth quarter appeared “challenging”, with retailers, farmers and manufacturers already working to ensure that they had enough supply for the winter.

The lorry driver shortage, estimated to be about 100,000 drivers, according to the Road Haulage Association, has exacerbated this problem. Dickinson called on the government to “urgently extend its visa scheme” in order to address the shortage, adding: “Without swift action, customers face disruption and frustration this Christmas.”

Paul Martin, UK head of retail at KPMG, said that despite September generally being a strong period for retailers as children head back to school, the country’s third-quarter slowdown had continued.

The Barclaycard research found that 46 per cent of supermarket shoppers had seen empty shelves, while 18 per cent had found it harder to source fresh fruit and vegetables and 13 per cent have struggled to buy fresh fish, meat, frozen foods and drinks. It also found that 59 per cent of consumers felt confident to buy non-essentials, the lowest percentage since February 2021.

Barclaycard found that 90 per cent of British households were concerned that rising prices and costs would negatively affect their finances. It said that the biggest concern for businesses and consumers would be how embedded the cost-push inflationary pressures were and while fuel prices were expected to subside, there was a serious question of whether inflation may persist in the long term.