UK economy grows after boost from camping holidays and meals out 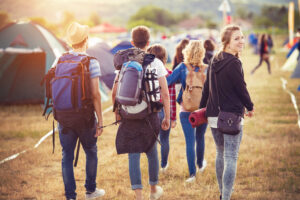 The UK economy grew by 0.4% in August as more people dined out, went on holiday and attended music festivals.

The Office for National Statistics (ONS) said the services sector made the biggest contribution to economic growth in the first full month after all Covid restrictions were lifted in England.

There was also more demand for hotels and campsites.

Restrictions on social distancing were eased from 19 July.

The ONS said the economy is now 0.8% smaller than it was before the pandemic.

“The economy picked up in August as bars, restaurants and festivals benefited from the first full month without Covid-19 restrictions in England,” said Darren Morgan, director of economic statistics at the ONS.

“However, later and slightly weaker data from a number of industries now mean we estimate the economy fell a little overall in July.”

The ONS said economic growth fell by 0.1% in July compared with initial estimates of 0.1% growth.

Activity in accommodation and food services rose by 10.3% in August, within which hotels and campsites recorded 22.9% growth.

In travel, air transport and rail both grew in August as Covid-related measures eased, however both industry are still trading far below pre-pandemic levels.

Emma-Lou Montgomery associate director at Fidelity International, said that while August’s growth “marks a small rebound” on July, “the worry remains that economic growth won’t even be in touching distance of pre-pandemic levels until well into next year”.

“This all comes in the crucial lead up to Christmas, when suppliers and retailers should be firing on all cylinders,” Ms Montgomery said.”But with households facing steep price rises for everyday items, from the food shop through to the gas bill, there will be little desire – or capacity – to spend, spend, spend.”

We spoke to some of the UK smaller businesses one their reaction to the figures;

Chris Sanderson, CEO of the hospitality recruitment app, Limber: “After endless lockdowns, and with life back to a relative normal in August, the hospitality sector was finally on the front foot again and driving the economy. There is a lot of pent-up demand for just being social and out with family and friends and that bodes well for the sector even as we enter the winter months.”

Robert Walton, Managing Director of commercial interior specialist,  The Lindhurst Group: “The next 6 to 9 months are looking extremely tough. There’s still huge uncertainty in the hospitality industry and if consumers don’t have cash they won’t spend in this sector. Having survived Covid without any Government support, we’re very concerned with spiralling costs and market uncertainty that the next 6-9 months will be extremely difficult.”

Suzanne Noble, Co-director, Startup School for Seniors: “While none of us can predict the future of the economy, I’m fairly certain we’re headed into a bleak winter. I’m primarily concerned about rising unemployment now that furlough has come to an end. We’ve seen a sharp rise in enquiries from over-50s coming from those who are at risk of losing their job or who have been made redundant. I suspect the worse is yet to come.”

Barry Whitehouse, owner of The Artery in Banbury: “Over the past few months, business has been hard. Footfall and sales in our physical store have dropped and online sales are now the lowest we have seen since we set up our online shop 16 months ago. I would like to hope that the economy will improve as we head towards Christmas, but I am not fully certain this will be the case. Shoppers do not seemed geared up to spend money, and with fear of shortages over Christmas they seem to have already resigned themselves to the fact that they’ll be spending less. We have also been hit hard with supply chain issues, and huge price increases which we have no choice but to pass on.”

Paul Harfleet, Founder of the online fashion retailer, Birds Can Fly: “I’m nervous about the economy and concerned about what might happen and whether my business will survive. On a positive note, Christmas still offers some promise in terms of sales and insecurity, in theory at least, is the homeland of the entrepreneur.”

Simon Lister at the financial comparison website, InvestingReviews.co.uk: “There are no end of challenges facing the UK economy right now, not least the record number of vacancies and why they’re not being filled. If job vacancies aren’t being filled, the economy can’t fire. Add ongoing supply chain issues, rising energy bills and looming tax rises into the mix and the outlook for the economy isn’t great. There are far more negatives than positives right now.”

Debbie Porter, Managing Director of Bakewell-based Destination Digital Marketing: “The number of financial burdens being rested on the shoulders of ordinary citizens post-lockdown and post-Brexit gets more unbearable at every turn. Spiralling costs, tax hikes and complete gaps in parts of the economy that once were strong is the biggest concern, coupled with Government leadership that personifies rule from an ivory tower.”

Scott Taylor-Barr of Shropshire-based Carl Summers Financial Services: “I never expected to be talking about petrol shortages, empty shelves, farmers culling and burning their own livestock, or heating gas supply issues in modern Britain. The fact that we are also now facing an increase in taxation and high inflation makes things even worse. I have no faith in the current administration to be able to competently handle the issues facing the economy, as they seem to have made a hash of most of the problems that have faced them so far.”

Kevin Drew, Managing Director of Derby-based accountancy firm, Ascentant Accountancy: “The economy is a mixed bag. On the one hand, we’re seeing an increase in startups by people who were made redundant during the pandemic, on the other, businesses looking to let staff go due to the end of furlough, a decrease in sales activity and a lack of forecast cashflow. With an uncertain winter ahead, it’s clear that small businesses need more support and the announcement of National Insurance increases will do little to comfort either new startups or firms that need to cut costs. For many small business owners it’s increasingly feeling like a no-win situation.”

Read more:
UK economy grows after boost from camping holidays and meals out