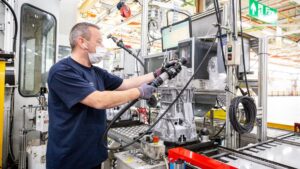 Manufacturers raised their prices by the largest amount in at least two decades after a “severe” increase in raw materials and energy costs, a closely watched report said.

Factory owners are having to shoulder painful rises in an array of input costs and are charging their customer more for finished products, according to the IHS Markit/CIPS UK Manufacturing Purchasing Managers survey.

It warned that factory gate prices had jumped by the most in the history of the poll, which was started more than 20 years ago. Some companies had reported losing orders from overseas clients because of delays at ports and shortages of freight capacity.

“This low growth environment is occurring in tandem with a severe upshot in inflationary pressures, with manufacturers reporting both a near-record increase in input costs and record rise in selling prices.”

The survey underlines the quandary facing the Bank of England, with ratesetters considering raising borrowing costs just as the economic recovery appears to be running out steam.

The survey’s headline index rose for the first time in five months to 57.8 last month, from 57.1 in September. However, a gauge that measures output fell to 51.3, its weakest in eight months, from 52.7 in September.

“Shortages in labour, a supply chain crisis and input costs rising at record rates continue to hamper manufacturers who are being stalked by the after-effects of a post-pandemic boom and a new trading environment,” Fhaheen Khan, senior economist at Make UK, said.

There were some grounds for optimism, with manufacturers reporting a slight improvement in new order growth and an increase in hiring. However, IHS Markit warned that pockets of growth could be at risk from “supply chain, Brexit or Covid headwinds” and higher borrowing costs.

“Manufacturers continue to report supplier lead times, fuel, transport, and energy bills rising that could result in some having to reduce, or even shut down, production to weather the incoming storm,” Khan said.

Pantheon Macroeconomics said it expected manufacturing output to “hover” around 2 per cent below pre-pandemic levels over the next six months. It said that inflationary pressures would crimp demand but that manufacturers would remain “busy” over the winter, having accumulated “huge” work backlogs.

Investors expect the Bank to raise rates on Thursday for the first time since the pandemic, taking the base rate to 0.25 per cent from its all-time low of 0.1 per cent in an attempt to douse the inflationary fires.

However, some economists think the central bank may stay put until a clearer picture emerges of the scale of the slowdown in the recovery. A preliminary reading from the IHS Markit survey of the dominant services sector, published last month, showed activity rising to its highest level in three months.