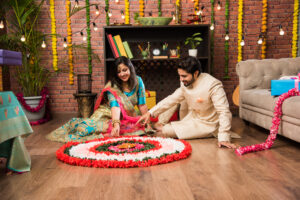 People celebrating Diwali have seen their preparations hit by delays due to Covid and a shortage of lorry drivers.

The festival will be celebrated by Hindus, Sikhs and Jains on Thursday.

Sital Raja-Arjan, who runs a Hindu one-stop store in Bolton, relies on deliveries from India, but said she was now getting one a week, as opposed to the four she received pre-pandemic.

In October, the government introduced temporary visas for 5,000 lorry drivers amid concerns over deliveries.

Ms Raja-Arjan’s store House of Raja’s sells everything for the festivities, from brightly coloured and heavily embroidered silk saris to candles, curries and sweets.

She said the reduction in deliveries had led to her losing 50% of her business, as many of her customers would have already bought new dresses for Navratri, a nine-day festival which precedes Diwali.

“Goods weren’t here on time, so come Diwali, I’ll be left with a lot of surplus stock,” she said.

She said it was not possible to get many of the goods she sells locally, but the delivery problems had taken her by surprise.

“When you’ve done the same process for 30 years and suddenly that process is taken away… we never had a plan B, because we never knew we’d get Covid,” she said.

The pandemic has also meant shoppers like Hiren Patel, 29, who usually travels to India to buy food and clothes for Diwali, have been forced to make other plans.

He said the celebrations required specific purchases, such as “certain specific flours you need for certain specific ingredients”, but “even just cost of things going up has an impact on what delicacies we would usually make”.

Student Anita Vekaria also usually travels to India with her family to buy four new outfits for the festival, but has had to stay local this year.

She said she had noticed issues with food and clothing in the run-up to the festival, but was full of praise for Ms Raja-Arjan.

“What Sital’s fantastically been able to do is make sure she’s catered for everyone’s needs,” the 22-year-old said.

She added that despite the problems, most people were still looking forward to the festival after not being able to see loved ones due to the pandemic.

“This year, it’ll be extra special, because you’ll be able to see them,” she added.

“It’s been hard, but there are better days ahead.”