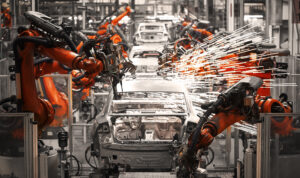 British businesses’ output has fallen for the sixth month in a row amid a supply chain crisis, energy price rises and a shortages of workers.

UK business output hit its lowest level since March during the last national coronavirus lockdown, according to the accountancy firm BDO. Its measure fell from 105.23 points in September to 103.35 points in October.

Businesses across the economy have been trying to keep up with rising demand after the ending of coronavirus restrictions but persistent supply problems have prevented them from taking full advantage of the opening up of society. Rising costs, including the increase in the price of energy, have also slowed growth.

The manufacturing industry is struggling particularly with finding the right materials, after months of disruption to production and delivery schedules caused by pandemic lockdowns. One persistent problem has been a shortage of computer chips, which has affected car manufacturers in the UK and worldwide.

BDO’s manufacturing index dropped two points to 97, nearing the 95 mark, which indicates declining output, while staff shortages prompted a slowdown in growth in the services sector, which dominates the UK economy.

“Businesses are facing an increasingly difficult winter,” said Kaley Crossthwaite, a BDO partner. “Between rising inflation and a lack of staff, 2022 could be a difficult year for companies who have been forced to prioritise short-term problems over long-term growth. At the same time, consumers are beginning to see the impact of these shortages, with rising fuel and energy prices, which may in turn lead to cutbacks in discretionary spending.

“In the final months of the year, businesses and consumers alike will be hoping that the economy can find some Christmas spirit over November and December and help take us into the new year on a high.”

Alongside the supply difficulties, Britain is also facing rising inflation, causing a headache for the Bank of England as it tries to balance a desire to keep prices stable without choking off the economy’s recovery. The official consumer prices index, at 3.1% in September, is well above the Bank’s 2% target.

BDO’s measure of the inflationary pressures felt by businesses also rose to its highest level since April 2017, while separate data from the bank NatWest showed record input cost inflation in every region of the UK barring the West Midlands.

Some City traders appeared to have been taken by surprise last week when only two of the Bank’s nine monetary policy committee members voted in favour of raising interest rates, even as it raised its forecasts for inflation to 5% in early 2022.

The Bank’s governor, Andrew Bailey, was forced on Friday to explicitly say interest rates were likely to rise in the coming year. “We expect interest rates to rise and we are very clear,” he said, adding that they paused only to wait for more definite signs of inflationary wage demands.

Sebastian Burnside, NatWest’s chief economist, said there were some positive signs from the UK economy, including rising economic activity in every region. However, he warned that the inflation outlook was damaging business confidence.

“Signs of a pickup in activity and employment growth across many areas have been somewhat overshadowed by skyrocketing costs faced by businesses in all parts,” he said. “Businesses are having difficulty filling vacancies due to a tightening jobs market, which is not only holding back activity in some cases and contributing to rising backlogs of work but also pushing up wages.

“When factoring in the surging prices of energy, raw materials and transportation, this has resulted in a cost environment unlike anything we’ve seen for at least two decades. Firms in almost every region and nation recorded unprecedented increases in their operating expenses in October.”

However, the data from NatWest and BDO suggested that businesses still remain optimistic about their prospects for the coming year overall.