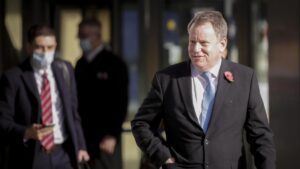 Northern Ireland risks becoming a “legal basket case” that will deter trade and investment if Article 16 is triggered, companies have warned.

Businesses there have taken calls from European Union customers asking if they are still allowed to trade because of the threat from Lord Frost, the Brexit minister, the province’s manufacturing trade association has said.

Triggering Article 16 would unilaterally suspend part of the Northern Ireland protocol, scrapping border checks on goods arriving from Great Britain. However, business groups said that it would not improve trade but instead would create legal uncertainty.

“The third impact will be those EU customers and suppliers who our manufacturers have been enjoying good trade with this year. They will also see huge legal jeopardy in buying or supplying to Northern Ireland and they’ll stop sending stuff or buying stuff.”

Aodhán Connolly, director of the Northern Ireland Retail Consortium, said: “Some are holding up Article 16 as this beacon of hope that removes the challenges of the protocol, but it doesn’t. Businesses ask for clarity, stability, affordability and simplicity and Article 16 does none of those things.”

The protocol, part of the Brexit withdrawal deal agreed between London and Brussels, is designed to avoid a hard border on the island of Ireland.

Seamus Leheny, policy manager at Logistics UK, said that if Article 16 was triggered, the EU could “start imposing more checks on EU ports that would impact trade with Great Britain”.