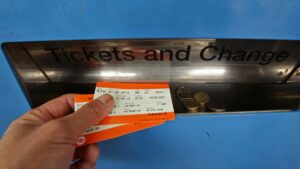 Ministers will slash the price of a million train tickets in half in an attempt to attract passengers back to the railways.

The sale is designed to ease the cost of living and bolster domestic tourism now that coronavirus rules have ended.

Seats on some London to Edinburgh services will fall to £22 and Leeds to York will drop to £2.80. Cardiff to London will be available for £25 and Portsmouth to Penzance from £22.

The discounted tickets are available from today and apply to off-peak fares for travel between next Monday and May 27. All English government- contracted train companies are included. The discounted routes will be chosen by operators, based on factors such as demand and the potential to encourage people to travel by train.

Passenger numbers have failed to recover since the pandemic and last month averaged 75 per cent of previous levels. Car usage is at 93 per cent.

Grant Shapps, the transport secretary, said: “Operators across the rail industry are coming together to help passengers facing rising costs of living by offering up to 50 per cent off more than a million tickets. There’s no better time to visit friends, family or just explore our great country.”

The sale is possible because UK train-operating companies have been, in effect, under government control since March 2020. Under the Emergency Recovery Measures Agreements, the government receives ticket revenue and pays most of the operating costs.

The move, marketed as the Great British Rail Sale, has been welcomed by transport groups as a way to drive up use of the railway.

Norman Baker, the former transport minister who now acts on behalf of the Campaign for Better Transport, said: “This is an excellent way to win back passengers and remind them that our trains are safe, clean and for a short period at least much cheaper too.

“I hope the take-up of this offer will attract people on to trains and actually end up generating extra money for the government. It can show the Treasury that the way to increase income is to cut fares, not keep ratcheting them up and driving people off the railway.”

The tickets are on sale via train operators and platforms such as Trainline.