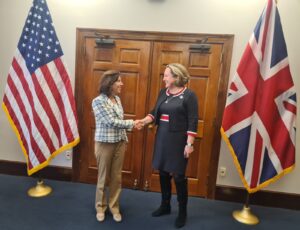 Britain’s trade talks with the US are moving ahead with only “minimal” input from workers, small businesses and thinktanks, according to MPs who accused the UK trade secretary, Anne-Marie Trevelyan, of shielding her department from outside scrutiny.

Conservative and Labour MPs on the trade select committee also said scrutiny of a deal struck with Australia and New Zealand was in danger of being “rushed through” parliament before they could make an assessment of its impact on imports and exports to and from the Commonwealth countries.

The row came after two days of talks between Trevelyan and the US trade envoy, Katherine Tai, in Aberdeen this week.

It is understood the talks amounted to little more than “exploratory conversations”, according to officials close to the talks.

Officials on both sides discussed the impact of the Russia-Ukraine war on the global trade system before moving on to talk about on the “principles” governing a potential deal between the UK and US.

The US is the UK’s single largest export destination and UK-US total trade was valued at more than £220bn in 2020. A UK-US free trade agreement could increase trade between both countries by more than £15bn “in the long run”, according to government projections.

Talks have been in progress for more than 18 months against a backdrop of increasing scepticism that a deal can be agreed by the US Congress.

Speaking on Wednesday following a conference on trade, Adam Posen, a former Bank of England policymaker and head of the Washington-based Peterson Institute, said there was little chance of a deal between the UK and the US while the Good Friday agreement, which secured peace in Northern Ireland, remained in jeopardy.

“The US Congress doesn’t want to approve any trade deals of any kind with anybody,” Posen told Bloomberg. “Then you throw in Northern Ireland. This is not going to happen, 100%.”

MPs are concerned that any proposals will downgrade workers’ rights, despite promises on both sides.

The US president has pledged to protect workers’ rights as part of any trade deal and his officials have included equal numbers of representatives from business and unions on trade advisory boards.

Joe Biden is known to question trade deals that just cut tariffs and make goods and services exports easier, arguing that it has failed to benefit living standards in a majority of nations, including industrialised areas of the US.

Trevelyan said the TUC general secretary, Frances O’Grady, was involved in talks in Aberdeen and she expected unions to play a role in advising the government on future trade deals.

But she was unable to say if there would be representation for unions, small businesses and independent experts on all groups, adding that she wanted to be flexible and “fleet of foot” in how she approached trade talks.

Labour MPs on the trade committee accused the trade secretary of a “top-down” approach that excluded a range of voices, heightening the risk of ministers signing deals harmful to domestic industries.

Lloyd Russell-Moyle, the Labour MP for Brighton Kemptown, accused Trevelyan of refusing to follow the US and the EU, which included equal numbers of businesses and unions on advisory committees, after it was revealed that the UK had included unions on only six out of 21.

Shevaun Haviland , the head of the British Chambers of Commerce, has yet to be appointed to an advisory group, denying the lobby group’s mostly small and medium-sized businesses high-level representation.

Trevelyan, who expects a US trade deal to improve the wages of British workers, said: “We are getting great input from all these sectoral groups. Everything is in an agile form, and we are looking to include a mix of expertise. There are six where we have invited unions and we continue to look across the piece for advice to make sure my team have the best people to advise them.”

Rosa Crawford, the TUC’s trade policy lead, said: “The TUC has been waiting nearly 18 months for the government to agree to all our nominations for the trade advisory groups.

“If the government seriously wants a ‘worker-centred’ approach to trade deals it shouldn’t be dragging its feet on trade union representation. It should be ensuring all unions with an industrial base in the sectors covered by the groups are represented.”