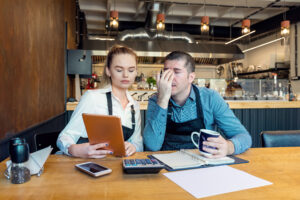 Three-quarters of small and medium-sized companies are worried about the long-term impact the cost of living crisis, soaring energy bills and rising inflation will have on their business, a survey has found.

Just over half of SMEs said they were concerned that rocketing prices would dent consumer spending, in response to Barclays’ SME Barometer, a quarterly survey of business sentiment conducted for the bank.

More than a quarter of the 574 firms surveyed said they feared that having to increase their own prices in response would make them less competitive.

A tight labour market is putting further pressure on businesses, they reported, with some struggling to hire new staff. Recently companies across a range of industries, from nurseries to nightclubs, have reported problems finding workers to fill vital roles.

However, the four-day bank holiday weekend for the Queen’s platinum jubilee provided a rare bright spot for SMEs, who said they believed sales would rise during the break.

The late May bank holiday has been moved to 2 June, creating an extended break from then until 5 June, as part of a year of events marking the first time a British monarch has been on the throne for seven decades.

Independent pubs, bars and restaurants are expecting a sales boost worth about £76m during the jubilee celebrations on Thursday and Friday.

Businesses who responded to the Barclaycard survey predicted that the festivities would bump up their revenue. Six in 10 SMEs said they were forecasting 10% higher sales on average between April and June compared with the same quarter a year earlier.

Hospitality and leisure businesses also expect revenues to be a third higher during the three-month period than in 2021, when they reopened as Covid lockdown restrictions eased.

While some SMEs are positive about their own prospects, nearly half said they were pessimistic about the outlook for the wider UK economy, while two-fifths reported that the current business environment is unstable.

Sentiment around business prospects and stability have both dropped since the first quarter, and were well below the levels recorded early in 2021, despite that being a period when many coronavirus restrictions were still in place.

Businesses’ concerns about the future economic environment follow a successful first quarter of the year, when more than half reported rising sales compared with the final three months of 2021.

These figures are supported by the volume of debit and credit card payments processed to SMEs, which saw a 20% increase in value and a 35% increase in volume between January and March compared with pre-pandemic levels, according to figures from Barclaycard Payments. It said the large growth in spending with SMEs can be partly attributed to the accelerated switch from cash to card payments witnessed during the pandemic.

Colin O’Flaherty, head of SME at Barclaycard Payments, said: “After an exceptionally tough time for the hospitality and leisure sector, it’s encouraging to see that businesses have seen revenues rise over the last few months, despite a challenging economic climate.”