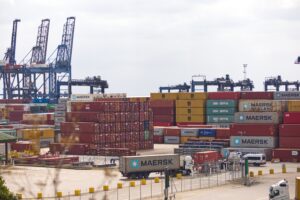 Talks between the Unite union and the company that runs Felixstowe port, which were aimed at stopping an eight-day strike by dock workers at Britain’s busiest container port, have ended without a deal.

Negotiations came to an end despite the company’s new offer of a £500 bonus for each of the 1,900 dock workers, who have already voted in favour of strike action between 21 and 29 August amid a pay dispute with the Felixstowe Dock and Railway Company.

After negotiations in recent days between the company and unions at the Advisory, Conciliation and Arbitration Service, the Hong Kong-owned port offered workers a £500 lump sum, in addition to its previous offer of a 7% pay rise.

The company said on Tuesday that unions would put the bonus offer to their members who were salaried staff at the Suffolk port.

However, it added that workers who were paid hourly at Felixstowe – who represent about 85% of the dock workers – would not be given the chance by Unite to vote on the offer.

A port spokesperson said: “There will be no winners from a strike which will only result in their members losing money they would otherwise have earned. Our focus has been to find a solution that works for our employees and protects the future success of the port.

“The union has rejected the company’s offer to meet again.”

The Guardian understands that Unite would be willing to attend more talks only if the company increased its pay offer above 7%.

The union has previously rejected this offer, saying it was below the 11.8% retail prices index (RPI) level of inflation, its preferred measure, while workers received a below-inflation pay increase of 1.4% last year. Company figures suggest the average annual pay of Felixstowe dock workers is £43,000.

Unite has pointed to the port’s profitability and decision to pay out multimillion-pound dividends to investors. Felixstowe Dock and Railway Company made a pre-tax profit of almost £61m in 2020, according to its most recent accounts.

Unite’s national officer, Robert Morton, said the port “can afford to put forward a reasonable pay offer to our members but once again has chosen not to”, adding: “That decision was driven by greed, not need.”

He added: “Unite’s door remains open for further talks but strike action will go ahead unless the company tables an offer that our members can accept.”

There has not been a strike since 1989 at Felixstowe port, which is owned by the Hong Kong-based conglomerate CK Hutchison Holdings, owner of the Three mobile phone network and the healthcare retailer Superdrug.

Any prolonged industrial action at the docks would probably bring the container port to a standstill, and would almost certainly have an impact on the UK’s supply chain, further knocking the British economy as it braces for recession.

The logistics hub handles about 40% of the containers entering and leaving the UK – representing about 45,000 containers each week – filled with freight including consumer goods, clothing and canned food.